Yesterday I took a trip to a small country township that holds some special and impactful memories for me. I drove to Majorca where I went to school for some of my later primary school years. I remember going to a school with fifteen other kids across six grades. Earlier generations from my family lived in this small place also.

‘I wander in the old graveyard where my great-great grandparents and my great-grandmother are buried. For years we visited these graves at Christmas and other special days, the cemetery is a very familiar place to me. Today is silent, the twigs snap beneath my shoes as I walk amongst the early settlers to pay my respects. 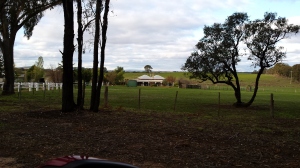 I drive past our old farm-house in nearby Craigie where my family tried to make a living from a small farm. I slowly move the car along the dirt track, giving myself as much time as possible to cast my eyes right and left.  At the top of the rise I can see the start of the old property in the  distance. Nostalgia never fails me, I love this place especially when  I catch a glimpse  of the old house nestled so beautifully amongst the dams and green paddocks. Old gum trees dot the horizon and apart from a cleared background paddock, all is familiar. Memories of riding my bike from school up the dirt road flood in. I love the gates across the entrance to this property, the driveway winds downward and the sheds are to the left and the house is to the right. A dog barks loudly and runs at the fence as I slowly amble past. I would give anything to drive though those gates but I turn around and head toward Majorca which is two kilometres away.

Coming alone was a good tactic. I’ve been many times before but with others for company. Of course, with company comes distraction and talk. Today, I feel and take in the full impact of a place I knew as a child. I drive along to the old school site, I say site because the beautiful red brick school building was burnt down in the bushfires of 1985 fires. I remember that school with clarity. It was a grand building and had an old brick dome well near the front entrance.

Today, all that remains are the eerie gum trees that tower tall across the rise and a timber sign depicting the school dates. There is a newish house that has been built on the land during the last couple of decades but sadly it looks hideously out-of-place. Next door to the old school ground is the original cottage, it’s been rearranged over the years but back in my time the school teacher and his family lived there. I remember my teacher from that time, his name was Dino Munari (Mr Munari to us). I can’t imagine how a teacher with an Italian name fared amongst the very Anglo locals during the fifties, although from memory he was a good Australian rules footballer and was very well liked. I recall clearly that when we kids went out to the shelter shed for lunch, Dino  used to go through a side gate connected to the school-house for his own lunch. As I pass the school site, a strange unsettled feeling floats over me. I’m troubled by the fact that the school no longer remains, the loss of this place is of major historical loss. I turn my back on the tragedy and move on.

Then it’s down to the depleted main street, it’s been decaying for years now. The old store burnt down a few weeks ago much to the angst of locals and historians. 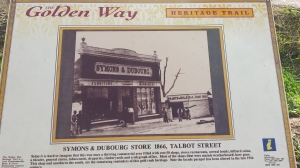 The building was reported to be in poor condition and didn’t stand a chance when it caught fire. Despite its run down condition the store had been an icon of the town, it was opened in 1866, today it sits in a pile of rubble, gone forever. It is probably the biggest (apart from the school) most significant loss to the appearance of the small town in decades. It has been known throughout the district as ‘The Majorca Store’ and there wouldn’t be too many people in the district and beyond who hadn’t heard of this old landmark. 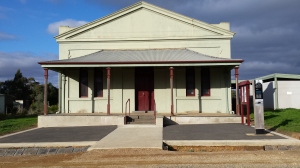 The only building that’s had any visible upkeep in decades is the Town Hall. Recently there have been government funds spent on it,  so this building should remain intact for many years to come, I hope. It had substantial damage during the eighties also due to the bad fires. I meander along this sad streetscape called Talbot Street and wonder if there will be anything left at all in another fifty years. So many wonderful old buildings including countless pubs can now only be seen in historical pictorial publications. All gone now. Majorca’s starting to resemble a ghost town.

In another street leading to the school the old Post Office has been converted into a private residence and looks sturdy and quite substantial. This has always been a lovely building and my hopes are encouraged each time I pass this grand old place. I walk past this beauty and watch as the winter sun catches its beautiful brick façade.

On the corner of Talbot Street just across from the rubble that was the general store, a stoic looking building remains, in what seems to be good condition. I believe this house was once the London Chartered Bank. Somewhere along the way I  also heard that it became the residence of the ‘Nicholas’ family of  ‘Aspro’ fame but I could be incorrect about that. I have for many years been fascinated by this residence and could think of nothing better than being able to open the front door and explore the grand rooms within. I move on wistfully.

I smile as I wave to the occasional farmer passing in his ute. I note the curious looks as they ponder why someone is walking around Majorca on a Saturday afternoon in sunny but chilly weather? I listen to the sound of this old town now silenced with age and I experience a pang of sadness. For a few minutes I angst over the wasted history that is no longer available and then I remember that all things change and evolve. I look down    desolate Talbot Street and imagine the bustle of the place a century and a half ago, I can hear the horses hooves and the grate of the sulkies on the rough gravel. Yes, I guess all things pass.’

6 Responses to Almost a ghost town…Majorca