What our stories tell us

Posted on October 18, 2018 by Heathermargaret

This year, I’ve been preoccupied with publishing my first novel, Finding Eliza. Actually, it has taken over my life, every day there have been numerous emails to answer, events to attend and decisions to make. It’s been a stimulating  time but a time to reflect and appreciate a process that has resulted in the making of a book, my book.

Holding my book in my hand for the first time gave me joy, goosebumps and anxiety all in the same moment. What if it’s not okay, what if the readership don’t like it, what if, what if, what if? There have been moments of doubt since and certainly before, releasing Finding Eliza but also some memorable experiences. So many special and heart warming moments when people whom I’ve never met before, tell me about their own lives and how the book touched them in different ways.

They want to know why I write, how I thought of the story. Then, after satisfying their initial curiosity and perhaps ensuring I’ve passed the test, they tell me their own story. So many wonderful and special stories about life, migration, love, sadness and loss and the stories keep coming.  I’m humbled by the conversations I’ve had with people who have so graciously bought and read my book.

I’m also humbled by the many, many emails and texts that have flooded in over the months. People tell me they cried when they read the story of Knill searching for his mother. Others related to the description of places in the book that they themselves had been to and others wanted to know what happened to certain characters beyond the last page of the book. Some readers said they didn’t want to finish the book because it meant severing contact with the people in the story with whom they had become attached.

For me, the writer, I had similar feelings about leaving my characters after the book was released. I had lived with them in my head for years , especially the last two years. They were part of my daily thinking – closing the cover on the last page was hard. I did in the first few weeks, secretly re-read a few chapters, to gather the closeness again. After all, they were part of me, I was part of them.

I remember, years ago at a workshop, accomplished writer, Paddy O’Reilly said that a writer has to ‘love their characters’. I recall, much to my embarrassment now, that I wasn’t so sure about that and of course voiced my opinion at the time. She graciously allowed me to think it my way, but I’ve since learned that she was absolutely right. I love my characters and for me there is no other way to write. I have to say though, the process of loving the people you write about, even if they are difficult, has to develop during the process. It’s a love that’s steeped in understanding and it’s gathered along the way.

Anyway, I digress. I was talking about the people I have met and exchanged heart warming tales about their lives. Stories of courage, abuse, love, sacrifice, dislocation, family secrets, countries at war and resilience, the list goes on. I guess, in the last months I’ve discovered the human spirit in the simplest and yet the most complicated of ways. Everyday people, have the best and most meaningful 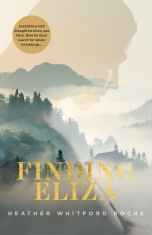 stories to tell. More about this another time.

Writing my book was just about telling a story. A fictional story but for me there were aspects of self, family, community and above all I hope it represented the humanity of ordinary people and their lives. The process of writing Finding Eliza taught me about how much there is to love and admire, sometimes amidst difficult circumstance and survival. Our stories tell us this, time and time again.

Counsellor, writer, mother of adult sons and wife. The order of above changes regularly depending on lifes' pressing issues.
View all posts by Heathermargaret →
This entry was posted in Uncategorized. Bookmark the permalink.